New York Is an Injury Zone for Construction Workers

A recent criminal case playing out in the courts of NYC demonstrates that construction safety continues to be a huge problem in the city. After construction worker Carlos Moncayo died in 2015, crushed by a collapsing wall, two employees of the construction firm employing Carlos were actually charged with homicide in his death by allowing the unsafe working conditions that led to his death. One of the men on trial in fact blamed the other defendant for not letting him fire the foreman on the construction site whose actions he alleged were the cause of the man’s death.

That sad case and the overall increasing number of construction site accidents can be attributed to the fact that more construction is occurring. According to the president of the New York Building Congress, $36 billion was spent on construction in 2014, with 98,000 new building permits issued by New York City. The current construction boom has led to more injuries and accidents, with construction workers, in some cases, paying the ultimate price.

Workers in the construction industry face the risk of serious injury on a daily basis. OSHA reports that of the 4,251 fatal work-related accidents in a recent year, 20.5% occurred in construction. Common types of construction site accidents include:

Fortunately, many accidents can be prevented when contractors take the necessary (and required) safety measures that are proven to minimize risks. When they fail to do so, they may be held liable for injuries sustained by workers when something goes terribly wrong.

Why You Need Legal Representation After Construction Site Accidents

Third-party contractors (general contractors and subcontractors) are involved at most construction sites. When proper protective gear is not provided as required by law, injured workers may be entitled to recover compensation from the responsible third party if they can show that the third party knew or should have known about the safety violations occurring on the site.

If you have been hurt in a construction site accident, it is in your best interests to speak with an experienced construction accident attorney as soon as possible. At The Law Offices of Justin D. Brandel, we offer a free consultation with no obligation. Contact us to find out if you have a case against a third-party contractor, and what damages you may be entitled to claim.

PrevPreviousEstablishing Property Owner Liability in a Slip and Fall
NextWhat is a Personal Injury Claim?Next Establishing Property Owner Liability in a Slip and Fall

Many terms related to personal injury law can be vague and amorphous to the non-lawyer – “negligence” and “duty” for example may not have obvious meanings to you. But “slip and fall” pretty much describes exactly what it is: a plaintiff slips on a dangerous surface, and then falls and injures himself as a result. While the thought of a person slipping and falling may bring to mind classic slapstick routines, actual slip and fall accidents are anything but a laughing matter.

Slip and fall accidents often lead to fractures, spinal cord injuries, traumatic brain injuries, and other serious damage. The consequences of these injuries can go on for years and decades, resulting in huge medical bills and rehabilitation costs, and pain and suffering endured over a lifetime. Individuals hurt in slip and fall accidents through the negligence of property owners may be entitled to claim compensation for their injuries. But how exactly is that negligence shown?

In most negligence cases, a defendant has to have taken an action which presented a foreseeable and unreasonable risk of harm to you the plaintiff. But in a slip and fall case brought against a property owner, negligence works a little differently. The property owner does not actually have to take the action which caused your injury (for example, spilled a bucket of soapy water that you then slipped on). Instead, property owners can be held liable where accidents occurred on their property and they failed to take reasonable steps to protect you as a visitor on their property. Specifically, the steps involved in proving a slip and fall case against a property owner are:

Residential property landlords may also be held liable for slip and fall accidents suffered by tenants and other parties. To hold a landlord responsible, you must show that:

Get Legal Assistance in Bringing Your Slip and Fall Claim

At The Law Offices of Justin D. Brandel, we go the extra mile for our clients. You pay us no legal fees unless we win your case for you. If you have been injured in a slip and fall accident on the property of another, contact us today to schedule a free consultation. 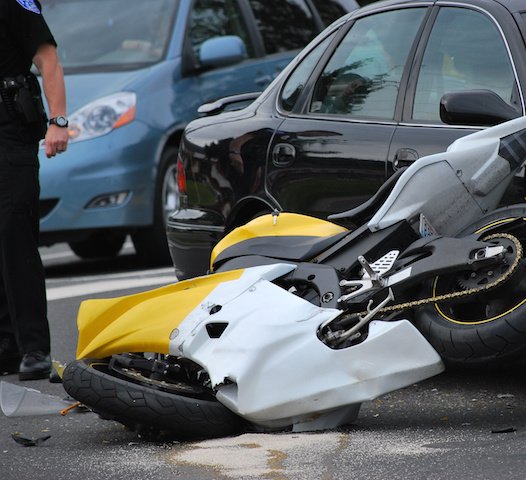 Distracted driving is a serious threat to every motorist on the roadway, and an extreme hazard for motorcycle riders. While passenger vehicle occupants have the protection of an enclosed vehicle, motorcyclists lack that protection. A motorcyclist hit by car can sustain serious, catastrophic, and even fatal injuries in accidents caused by distracted drivers.

A landmark research study released by the National Highway Traffic Safety Administration (NHTSA) and the Virginia Tech Transportation Institute concluded that driver inattention was indeed the most common cause of all crashes and near crashes in the United States. The report concluded that, “Nearly 80 percent of crashes and 65 percent of near crashes involved some form of driver inattention within three seconds before the event,” with cell phone use being a primary source of driver inattention. The report found that 3,179 people were killed and 431,000 were injured in motor vehicles accidents involving distracted drivers in a recent year. The Insurance Institute for Highway Safety (IIHS) also reported that a total of 4,295 motorcyclists were killed in traffic crashes that year, accounting for 13% of all traffic fatalities, which means that hundreds if not thousands of motorcyclists are dying as a result of motorists texting while driving each year.

Most Motorcycle Accidents are Caused by Auto Drivers

Most traffic crashes between motorcycles and other vehicles are caused by drivers who fail to register the presence of the motorcycle while navigating traffic conditions. Motorcycles have a smaller profile than other passenger vehicles, and often automobile drivers simply fail to observe that a motorcycle is sharing the road or highway. In a well-known study prepared for the NHTSA, commonly known as the Hurt Report, researchers found that:

The predominant cause of motorcycle accidents is the failure of motorists to recognize motorcycles in traffic.

The most frequent motorcycle accident configuration is when the motorcycle is proceeding straight ahead and an automobile turns left into the path of the oncoming motorcycle.

This serious problem is compounded exponentially when drivers are texting or otherwise distracted, and as a result, have even less aware of motorcycles in the roadway.

Despite Laws and Growing Awareness, Distracted Driving is Still Prevalent

In 2007, Washington became just the first state to ban texting while driving. Less than ten years later, 45 additional states and the District of Columbia banned the practice as well, and many public awareness campaigns have attempted to curb texting and driving. Despite those efforts, texting while driving is still commonplace. In a 2015 Erie Insurance survey, one-third of drivers admitted to texting while driving. At any given daylight moment in the U.S., an estimated 660,000 people are manipulating electronic devices or using cell phones while driving.

Are You a New York Motorcyclist Hit by Car?

After a motorcycle accident with serious injuries caused by a distracted driver, you need an experienced motorcycle accident lawyer to protect your rights and interests. Our seasoned litigators at The Law Offices of Justin D. Brandel are dedicated advocates for our clients. Contact us for a free consultation to find out about your options under the law. 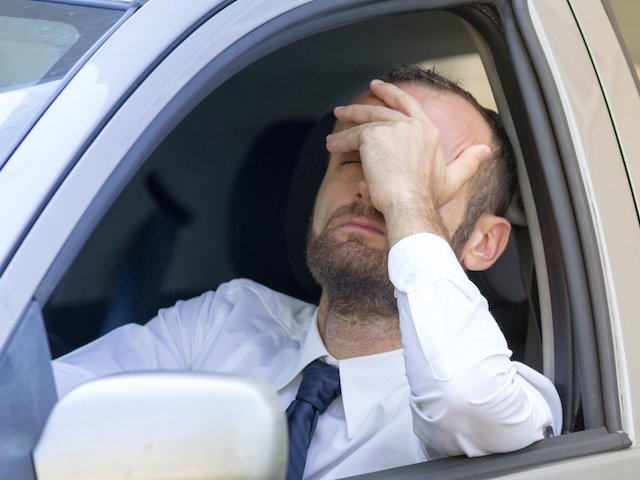 Aggressive driving is a category of dangerous driving behavior that is the underlying cause of many deadly auto accidents. This driving behavior is defined by the National Highway Traffic Safety Administration (NHTSA) as operating a motor vehicle in a manner that is likely to endanger, or actually endangers, people or property. Aggressive driving is classified as a traffic violation, as distinguished from “road rage,” which is a criminal offense.

Regardless of how it is classified, aggressive driving puts everyone sharing the road at risk of serious injury or death. It has become a serious problem on our nation’s roadways, as reported by the NHTSA. The administration is providing guides, information, and planners to law enforcement agencies throughout the country in an attempt to stop aggressive driving.

Aggressive Driving in New York: A Major Cause of Auto Accidents

NHTSA explains that not all instances of aggressive driving behavior are intentional. Drivers who are distracted or inattentive may just fail to obey traffic signals. Judgment errors while executing a turn can result in right-of-way violations and auto accidents.

While these factors may explain aggressive driving, they do not excuse it, especially when it results in an accident leading to injury of innocent drivers, passengers, bicyclists, and pedestrians.

Drivers who follow too closely, weave erratically in and out of traffic exceed the speed limit by 20 to 30 mph, run red lights and stop signs, and cut other drivers off in traffic are a serious hazard for other law-abiding drivers and their passengers.

If you have been seriously injured in a traffic crash caused by one of these negligent drivers, The Law Offices of Justin D. Brandel can help. Contact our office to arrange for a free case consultation. Our seasoned New York auto accident lawyers are available to review your case and advise you of the potential value of your claim, the time expected to reach a resolution, and to answer any other questions you may have. We charge no legal fees unless we win for you, so there is no risk in connecting with us — call now for help.

PrevPreviousSlip and Fall Accidents Are No Joke
NextMotorcyclist Hit by Car: Distracted Driving and Motorcycle AccidentsNext

The information on this website is for general information purposes only. Nothing on this site should be taken as legal advice for any individual case or situation. This information is not intended to create, and receipt or viewing does not constitute, an attorney-client relationship.

Before you go, make sure you get our Personal Injury Claim Checklist. Simply submit your information and you will be able to download the PDF with helpful information, free of charge.